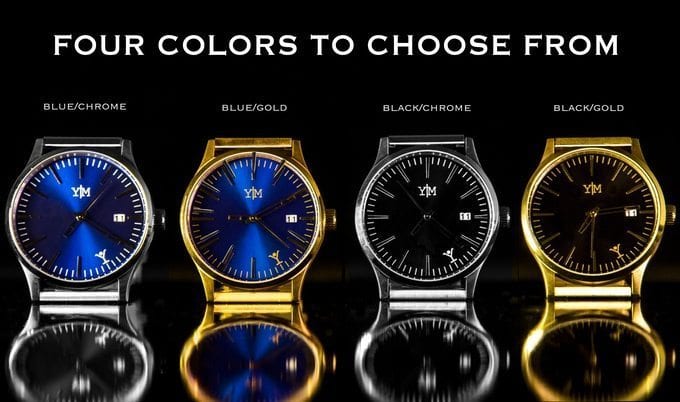 In February of 2014 Yes Man ran their first KickStarter campaign on one of the nicest watches we have seen on KickStarter. They were asking for $15,000 as their goal and they were able to get away and make double that landing at $32,648.

Besides the great looking sport face, Yes Man watches took a different approach to the style of their band. Instead of having holes in the band they are using notches in the band. The band will slide in and the buckle will lock in place where it is most comfortable for you. This was a great design and a perfect way from having the band be ruined over wear-and-tear.

We were big fans of this watch, so when we hear that in late 2015 they were making another watch we got super excited and had nothing but high expectations. When we saw the first couple pictures of the watch we have to say we were disappointed. They went away from the original band idea they had and they went with an all stainless steel look. Personally we thought that these watches were a major step back from the last. They didn’t look as sporty as their last watch, but instead they just blended in with all the other lower level watches on the market.

Shot Caller is what they called their new design. Coming in 4 different styles, blue/chrome, blue/gold, black/chrome, and black/gold. They called this watch a “bold, powerful, robust design” a watch that is supposed to last being made with surgical grade stainless steel and a 45mm case. For this KickStarter they wanted 10,000 and ended up getting $20,943 by the end of the campaign.

Yes Man ultimately decided to not sell their original watch any more (which was a terrible decision) and go full out with the Shot Caller watch instead. And the pictures on their site don’t do these watches any justice either; it actually makes them look worse.

Sadly, we think this new Shot Caller watch was a major step in the wrong direction for Yes Man. The material and quality of the watch is nothing to complain about, they are built to last, but the look of the watch is just substandard to us. We personally think that they should go back to the style that made them stand out and the style that was actually unique.