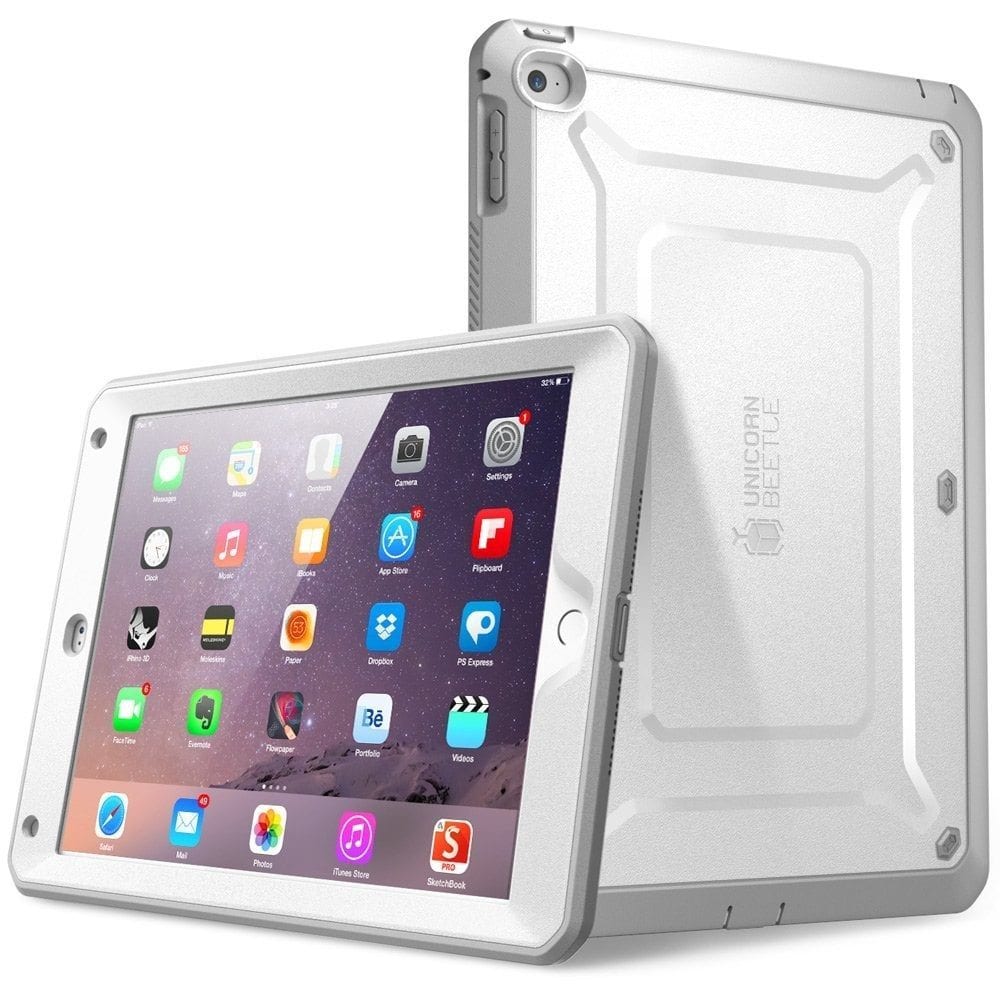 The Unicorn Beetle iPad Air 2 case by Supcase is the most badass case I’ve had to date.

The sleek pure white with light grey accents makes my iPad feel like a brand new, futuristic tablet. When I opened it, I immediately said: woah, that is sick!
One of the things I wish the case would have come with was some sort of instructions on how to install. The case did have a QR code to scan to watch a YouTube video before installation. But who uses QR codes anymore? I certainly don’t have space on my average iPhone 6 for a QR reading app. I would definitely have liked a quick print out that illustrated how to open the case and remove the two protective films.
I struggled for a few minutes to pull the rubber bumper off of the inner plastic hard shell and had to remove it again after the first install. This was because I realized there was a secondary film underneath (not only on top) of the plastic screen cover portion.

Another bit that was slightly irritating was that the portions that cover the headphone jack and the charging jack were rigid silicone. You have to work them open and closed a bit to gain a little bit of flexibility in the silicone in order to insert your 3.5mm or iPad charger. I’m also worried that this rigid silicone (which wants to return to the closed position) might press too hard on the cord while it is in the slot and corrupt the inner wires. Right now, nothing bad has happened, but I will update this if in the future that happens.
Something else that I really like about the case is the ample amount of holes on the bottom of the case that allow for minimal audio obstruction. As someone who consumes a lot of Netflix and Youtube, I get highly annoyed when cases obstruct my use of the built in speakers on my devices (*cough Lifeproof cough*).  This case actually seems to amplify the sound a bit (perhaps that is just in comparison to the previous one I had gotten used to).
Another plus about the Unicorn Beetle case is the screen protection that I mentioned previously. This eliminates the need for an additional screen cover. Make sure to thoroughly clean the surface of your iPad before installing this new cover!
I like the solid weight that this case adds. A lot of people might say that they want things to be lighter, but for me, the slight weight addition makes the entire product seem sturdy and expensive.

The only addition I would like to see to this case is some sort of kickstand.

The previous case I had been using had a killer stand system and I got used to being able to prop up my iPad whenever for a Netflix and chill sesh.

Overall, I would definitely recommend this case for tech lovers of all ages. It provides great drop protection and would be an excellent addition for college students who use their iPads extensively in classes!