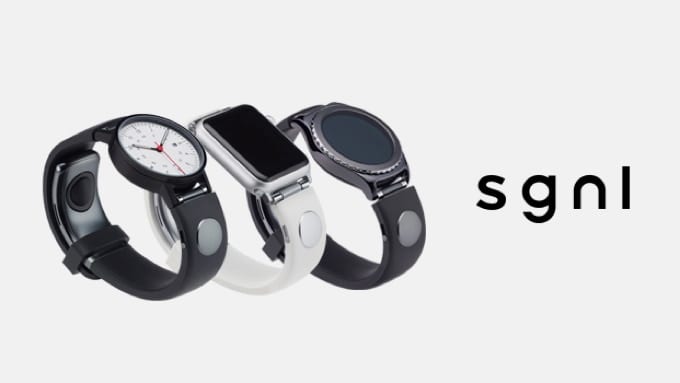 LOS ANGELES, CA- Every year, the future gets closer and every year, we find out which sci-fi gadgets are galloping towards us and which are looking more and more strangely dated as time passes. And with the bland resignation that the Apple Watch isn’t going away anytime soon, more and more weird allusions to Dick Tracy are worming their way into public consumption. Fortunately, some of these bizarre goods and services are surreal enough to be genuinely cool. Take Sgnl, for instance. A fun take on the act of miming a cell phone, Sgnl lets you take and make calls simply by putting your finger in your ear, and then delivering a, frankly, stunning level of sound quality, and it does so by using an almost invisible delivery system: your watch band. This simple work around lets you eliminate your easily lost headset from the increasingly long list of gadgets needed to function in our increasingly tech-heavy world. Sgnl is a cool, streamlined solution to the growing problem of digital clutter.

This, of course, doesn’t account for the undoubtedly strange technology, or possibly witchcraft, used to allow Sgnl to work. Actually, this device is a whole lot simpler than you might imagine. This incredibly advanced watchband contains two pieces of technology that aren’t nearly as new and unfamiliar as you might imagine. The first piece of this amazing puzzle, as you might assume, is Bluetooth. Part of this device’s appeal is that it allows you to keep your phone in your pocket, or purse, or bag while still going about your day and being available. Bluetooth devices are becoming a more and more widely used and this technology is becoming more and more central to life in the contemporary world.

The other half of Sgnl’s technology is, admittedly, a little more novel. Called a Body Conduction Unit, or BCU, this incredible innovation uses a two-pronged approach to getting your call from your wristwatch to your ear. First, it uses an “actuator unit that generates a body-conductible vibration with remarkably low power consumption,” as well as an “audio algorithm that selectively amplifies voice signals with proper wavelength modulation.” In other words, Sgnl doesn’t provide the illusion that sound is coming out of your finger, it actually sends sound up your arm, through your finger and into your ear. It’s a resolute technological jaw-drop.

This ultra-contemporary device can also be grafted onto most any watch you already own, whether or not that watch is a smart device. Your Sgnl even comes with a tutorial how to do it!

Innomdle Lab, which created this device, describes their project as “the smart strap that enables you to answer phone calls through your fingertip. Simply place your fingertip to your ear while speak through the embedded microphone. Replace your existing watch strap with Sgnl and you’re done… There’s no one who never lost their earphone in their lifetime. With Sgnl, you can keep your cell phone alone in your pocket and simply raise your hand to answer a phone call without carrying any extra headset or earphone. When you place your finger to your ear, your finger not only transmits the sound but it also blocks out background noise. So you can hear very clear voice in a loud places without worrying about other people listening in.”

About Innomodle: With just a small simple idea, CEO Hyunchul Choi developed Sgnl after winning 1st place during Samsung’s C-LAB competition in 2014… CEO Choi began to wonder if there was a way to solve this and came up with the idea of using one’s finger to transmit sound. He immediately proposed the idea to Samsung’s internal corporate venture department and thus Sgnl was born