FreeVision VILTA stands out from its competitors as a ergonomic 3-axis gimbal with a unique handheld and wearable functions. FreeVision takes a new approach by allowing the handle to be removed, while the gimbal base can be used independently. The base features a standard GoPro 2-prong mount that folds out on the bottom and allows you to attach the base onto numerous GoPro support accessories. When the handle is removed you can use the gimbal base on bikes, helmets, and just about any other mounting option you can think of. The FreeVision VILTA joystick is located on the base. When you detach the handle you will still have the joystick on the base to operate the gimbal and still have full functionality. The VILTA only supports the GoPro HERO5, HERO3 and HERO4 which we find as a negative of the product. 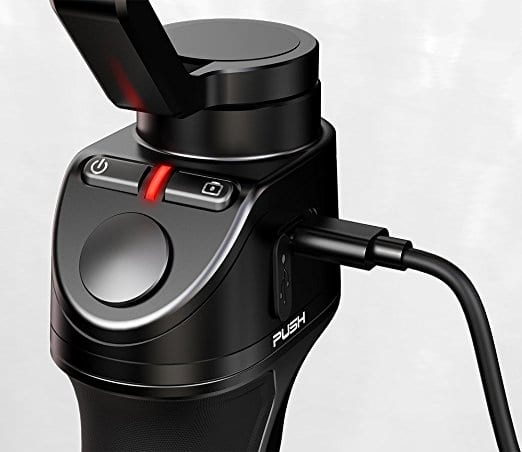 Since the gimbal is technically two pieces (counting both the base and handle) they each contain there own battery. The unit charges fairly quick and when both pieces are together the battery life can last from 9-10 hours. However, when the base is used separately the battery will only last 1.5 hours. Even though the battery life is small for the base, it does support an USB impute that installs into the camera holder to power the camera from the base/handle batteries. Comparing the battery life to the popular Osmo, I would say that the FreeVision VILTA has a much better battery life span.

Have full control the VILTA when it comes to using the gimbal or take advantage of the follow control using the pan and tilt axes, and 360°, infinite rotation along the pan axis. Use the step-less thumb joystick with adjustable speed and sensitivity when you want to use the manual mode. Showing the advanced side of the FreeVision, VILTA uses a advanced motor control and servo control algorithm that allows you to provide fast response speed and high control precision. Last, the VILTA has an auto-calibration feature that will automatically set the optimal balance every time you power on the device,

A new feature that Freevision will be releasing next month is a phone and camera adaptor so you can use it with your phone instead of a GoPro.

Overall, after playing with the FreeVision VILTA for a few weeks we were extremely impressed at it’s ability to perform just as well as our DJI OSMO Pro. Battery life is just as good if not better, the app functionality is easy to use and understand, ergonomic 3-axis makes for the perfect rotation and shooting, and the base/handle combination kit is perfect for every type of shooting. We think it stands up to the highly expensive OSMO Pro. The only negative we encountered was the lack of action camera models you can use with the gimbal. Since we have dozens of GoPros, after-market action cams, and sports cameras, we would love to have an option to buy a fitting that would work with all of them. Just having the option for GoPro minimizes the amount of people who can use the gimbal.